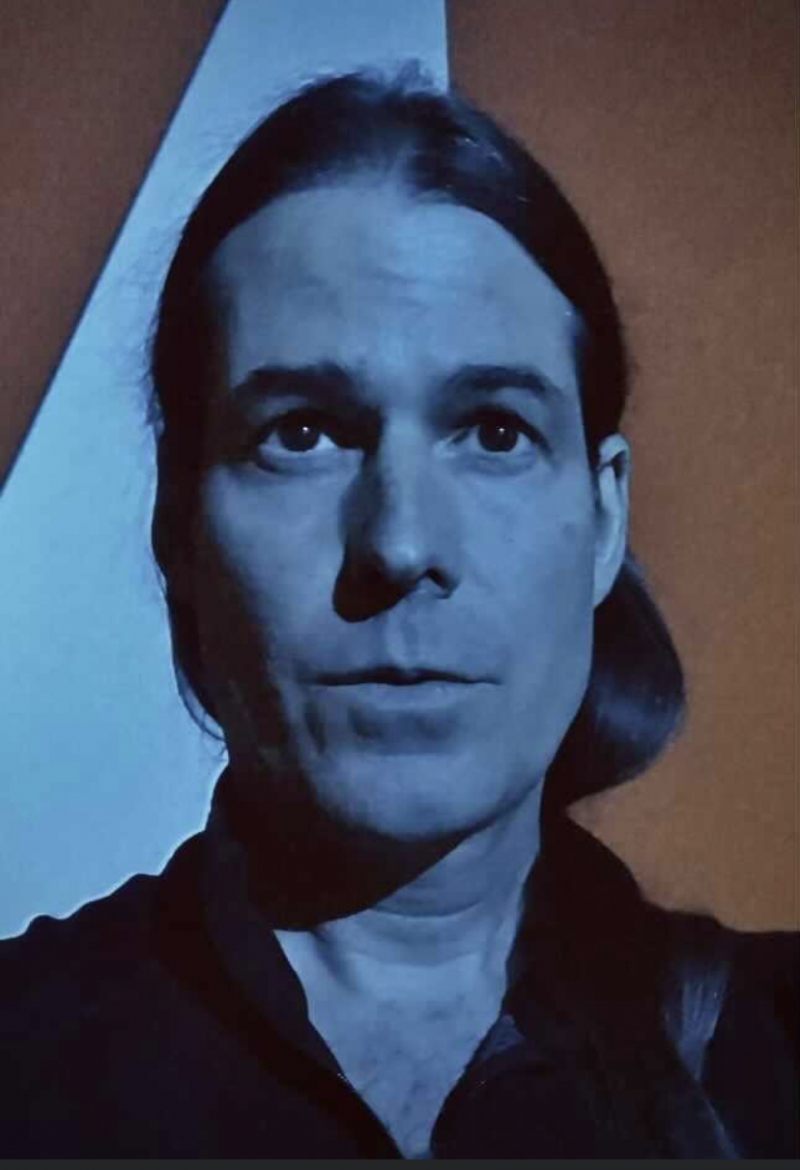 Integral Talk: Beautiful Awakening and the Different Ways That We See

Thank you Integral Art curators for including my work in this event; it is an honor to participate! For a long time now, I’ve been interested in, and deeply influenced by the work of Ken Wilber.

This painting that I will talk about today is from the Visual Narrative series; it is entitled, Recognition Itself

In this series, I explore visual and tactile relationships, while developing techniques through emergent and Self revelatory processes.

I am exploring the phenomena of *recognition, *Identification, orientation of the observer and observed, the “Beauty” of a *holon,” and the impulse to create in the known and unknown.

I encourage you to view this painting as if you are looking at clouds, allowing images to emerge and appear naturally, as your perspective informs the viewing.

One of the most influential paintings in my life, and an early inspiration to this series of work, was created by my Great Aunt.....
I remember looking at it as an infant while my mother rocked me.

As I grew up, I would often look at this painting when visiting my Grandmother. I was constantly attracted to and curious about the work, however, I was unable to identify the subject of the painting .... At one point I asked my mother “what’s this painting of, mom?” and she said, “it’s of two birds, don’t you see them?”.... No matter how hard I tried I could not identify and make the connection between my memories and the patterns in the painting; for some reason I couldn’t see the birds! It took me several years to finally identify the birds in the painting, and when I did, I felt as though I had found out the source behind a magic trick. Now I could see the painting both as I had seen it all my life up until that point... and I could also see the birds.......

This experience allowed me to consciously witness the mechanisms of Identification and Recognition.


(Identification or the differentiation between *Subject and *Object arising at the same time.)

There are 4 main themes that I am currently exploring and developing in this series.

1. I am paring fine motor development with Vision. (I’ve observed that Vision can inform movement and dexterity prior to identification and recognition, and have noted that we can consciously or unconsciously see a pattern before we comprehend or identify a pattern. Perhaps this is a variation of object permanence, articulating by fine motor gesticulation.)
2. I am developing different process while in deep meditative states arising in awareness (or Ground of Being, including Gross, Subtle, Causal; deep contemplative states and Ever present Non dual.) (No distinction between observer and observed/ no Subject Object distinction, flow states/becoming one with process itself.)
3. I’ve observed that fine motor finger moment can respond reflexively to the visual recognition of certain phenomena. (This includes the phenomena of pareidolia and apophenia. That is recognizing and responding to these phenomena in and of themselves prior to recognizing a class of objects derived from the phenomenon) ......and
4. That the concept of a Permeable Narrative or Open Context is simultaneously pointing to Knowing and not knowing, seeing and not seeing. (This open context includes randomness as an integral part of the frame work, allowing the permeability of definition/Narrative to define something that is constantly in the state of transformation.) This also speaks to the reality of an Illusion.

These kinds of phenomena and self (capital S and lower case s) revelatory experiences have fascinated me all of my life, and are now an aspect of the current series of paintings I’m working on in this Visual Narrative Series.

Now let us look deeply at the work. I have set up an open context to hold space and facilitate the entry into a different state experience while viewing. I think it’s important to set up or hold a safe space for viewing the work, so I will provide an opening for anyone who would like to participate.

This process is inspired by the work of Otto Sharmer (Senior lecturer at MIT) and is adapted and designed to facilitate a deeper viewing of the work.

We will be tuning into a deep essence and connecting with the potential that is seeking to emerge. In these deeper states, there is a sacred sense, or a sense that a birth is about to take place. This is a point where grace can intervene.

As your eyes explore the work, it’s important to establish where the attention resides for the viewing experience. The effects during the viewing will correspond with the quality of the environment or participation of attendees, and the depth to which the source of attention resides. ....Repeat

I invite you to suspend for a moment any preconceptions or cynicism (cynicism can create emotional distance) you may have. Stay open, stay present to what is arising at all times, while Sensing, tuning in to, acting in, and seeing all that’s happening with fresh eyes. Let go of any fear you might have, and let come in any new realization into this emerging open space. By doing this, we can develop rapport with what we are experiencing together.

1. First, Become quiet; soften your eyes and allow them to move freely. Now, witness what you see as if you are looking at clouds, allowing the content to emerge and appear prior to any preconceived notions... by suspending preconceived notions this will free up the space for something we don’t already know. Pause....
2. Next, I invite you to direct your vision to something you find interesting, or are attracted to. This process of viewing may begin to take on a life of its own. Notice that Vision itself effortlessly sees the content that is arising, and that what we see has its own visual narrative prior to the comprehension of what we see. Pause...
3. Further, I invite you to witness how different perspectives begin to inform and narrate the viewing experience. Pause.....

Now, I’d like to open the space for anyone who would like to talk about what their present experience is.

*1. “(A holon (Greek: ὅλον, from ὅλος, holos, 'whole' and -ον, -on, 'part') is something that is simultaneously a whole in and of itself, as well as a part of a larger whole. In other words, holons can be understood as the constituent part–wholes of a hierarchy.)”

*Recognition simply means that you are able to recognize an object's class (is it a human or a car, is it a truck or a tank, etc).

Pattern recognition involves matching the information received with the information already stored in the brain. ( exploring the idea that our biology can directly project visual patterns prior to Recognition and identification or a direct expression of emergence in the ever present.

*Identification of an object means that you are able to differentiate between objects. Making the connection between memories and information perceived is a step of pattern recognition called identification.

*In the “Visual Narrative series” I am exploring the possibility that two phenomena that are the prime catalysts of this process.

I coined the term Pareidoliapophenia to describe the play of these two phenomena in relationship to one another.

*What is Pareidolia? “which is the phenomenon of experiencing meaningful patterns in random stimuli”. Pareidolia is also been described as a type of illusion or misperception involving a vague or obscure stimulus being perceived as something clear and distinct for example in the discolorations of a brunt corn tortilla one sees the face of Jesus.)

Pareidolia like phenomena has been recognized in the past by well known masters like Leonardo dVinci and has more recently been examined by archeologist in the study of rock art.

Robert G. Bednarik writes that:
“Visual pareidolia occurs when meaningful patterns representing familiar objects are seen in what are in reality random or meaningless data. It is of significance to anthropology for two reasons: as a psychological phenomenon of the human visual system; and because of its important role in rock art interpretation. Once the brain has been conditioned to anticipate specific patterns, it tends to discover them with minimal stimulation, because most of the information processed by the human visual centre derives from within the brain.” (2017, 101))

*What is Apophenia? “The term has found a place outside of psychiatry and is used to describe the natural tendency of human beings to find meaning and significance in random, coincidental, or impersonal data. Apophenia may be described as the tendency to find personal information in noise, e.g., happening upon an open safety pin and seeing the arms as a sign indicating the time someone committed suicide.”

*Object- “a material thing that can be seen and touched.”

*Subject- “That which forms a basic matter of thought, discussion, investigation.”

“A holarchy is a connection between holons, where a holon is both a part and a whole. The term was coined in Arthur Koestler's 1967 book The Ghost in the Machine. Holarchy is commonly referred to as a form of hierarchy; however, hierarchy, by its definition, has both an absolute top and bottom. Wikipedia”

How can this work facilitate development?

1. I think that by engaging with the work it can facilitate multi perspectival awareness in that different viewers can see both similar perspectives and different perspectives at the same time.
2. I think that this work can facilitate the leap from *postmodern into post post modern or *integral orientation. Here I am evoking an entry into lucid contemplation arising in ever present non dual awareness and exploring the potential of creative processes that act as portals into different states arising in ever present awareness.
3. The intention is to communicate or transmit Visually to all developmental stages and states of awareness. I imagine the work to be an artifact as well as a a tool of transmutation with the potential to transmit an altitude that is outside of our current understanding and or a visual communication rather the linguistic communication.

How is this work Self Revelatory?

often I will take detail photos from different sections of the work that I am attracted to or find interesting, this process helps me to orient around aspects of the work that more clearly define the phenomena that I am developing. this is part of a modeling process that I do in order to develop the work and this is one of the meany ways the work informs itself. Bringing attention to an attractor or point of interest as an orientational principle to the work itself informing the creative impulse.

Fine motor finger movements follow Visual stimulus. Finger movements respond reflexively to the recognition of the phenomenan of pareidolia and apophina itself I explore the possibilities of directly projecting the nervous system through visual and tactile expression prior to recognition or identification.
The artifacts the process can activate insight and realizations.

How does this work relate to Waking up cleaning up, growing up and showing up?

Waking up- in the Ground of being. The viewing/witnessing process can act as a portal into deeper states arising in awareness/ever present Non-dual.

Growing up. Development that I experience as a result of the practice itself.

Showing up in all four Quadrants.